House prices in the United States saw their biggest increase in 30 years in April, new data has revealed.

The value of a typical home has climbed 14.6% per year, driven by a flight from cities to more rural areas and the availability of cheap mortgages.

This was according to the S&P CoreLogic Case-Shiller Indexes, the primary measure of home prices in the United States. In March, the year-on-year growth was 13.3%.

Seattle, Washington saw one of the biggest house price increases of any US city at 20%

Sharp increases in house prices, such as those seen around the world over the past year, often raise fears of a housing market “bubble”, the one that preceded the global financial crisis of 2008.

Phoenix (22 percent), San Diego (22 percent) and Seattle (20 percent) recorded the highest price increases among the 20 key US cities the index focuses on.

All 20 cities reported higher price increases in the year ending April 2021 than in March 2021, and five cities – Charlotte, Cleveland, Dallas, Denver and Seattle – recorded their highest gains of all time over 12 months.

“We previously suggested that the strength of the US real estate market was in part due to the response to the Covid pandemic, as potential buyers move from city apartments to suburban homes.

“April’s data continues to be consistent with this assumption. 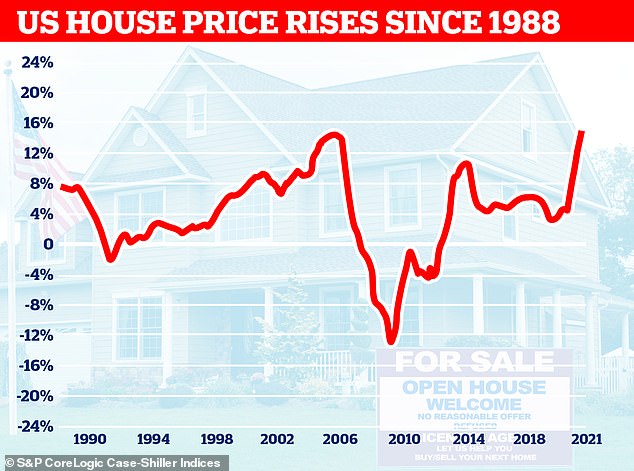 Rise and fall: This graph shows the fluctuations in house prices in the United States since 1988, including a sustained increase since the start of the coronavirus pandemic

“This surge in demand may simply represent an acceleration in purchases that would have occurred in the next few years anyway.

“Alternatively, there may have been a secular shift in location preferences, leading to a permanent shift in the housing demand curve.

“It will take more time and data to analyze this question.”

A separate study on house prices places the United States fifth in the world with an average annual price increase of 13.2% in the first quarter of 2021.

With twelve countries recording double-digit price growth in the year through the first quarter of 2021, it’s no surprise that discussions of post-pandemic property bubbles are on the rise.

The Knight Frank Global Home Price Index showed home prices were rising at their fastest pace since the fourth quarter of 2006, with an average increase of 7.3 percent.

Turkey leads the rankings for annual price growth for the fifth consecutive quarter, growing 32%, but after excluding inflation, real prices are rising by around 16% per year.

“With twelve countries recording double-digit price growth in the year through the first quarter of 2021, it is no surprise that discussion of post-pandemic property bubbles is increasing,” the report said. 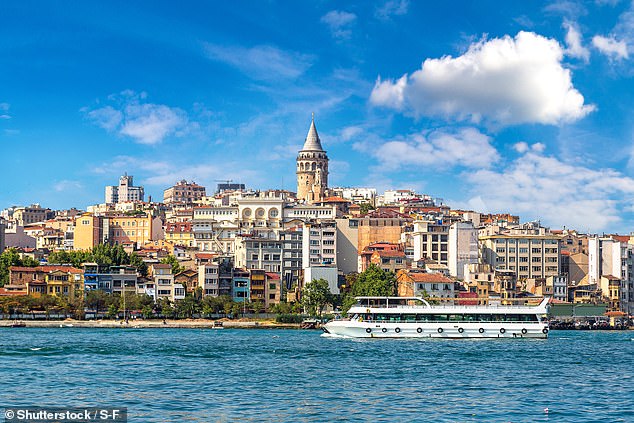 Istanbul, Turkey: Country house prices increased 32% in one year, according to report by realtor Knight Frank

However, he also said some governments were introducing measures to try to cool the housing market.

“Since January 2021, authorities in China, New Zealand and Ireland have stepped in with a range of measures ranging from tighter lending rules to higher stamp duties for multiple purchases,” the report said.

“Canada is also looking closely at a national tax on vacant housing and China is considering a national property tax.”

The construction company has issued an affordability warning for first-time buyers, saying house prices are now near an all-time high relative to average incomes.

This was influenced by buyers who rushed to finish before the reduced stamp duty holiday on June 30.

However, most experts don’t predict a stock market crash after that date, as they claim that lifestyle changes will continue to fuel demand.

Danni Hewson, financial analyst at AJ Bell, said: “There are a lot of factors at play here.

“Cheap interest rates and the availability of low deposit arrangements have undoubtedly fueled price hikes despite the country being in the midst of a pandemic that has impacted the economic health of Canadians. people.

“But this pandemic has also stimulated the market, changing our preferences.

“This change is unlikely to reverse and should keep the market warm for months to come.”

However, there are concerns about what will happen when the leave plan ends at the end of October.

“The X factor will be unemployment,” Hewson added. “How many people will still have jobs after the leave scheme ends?”

“How many mortgage holidays will lead to quick sales?” There is no denying that the next few months will be difficult for many once the support is withdrawn.

Some links in this article may be affiliate links. If you click on it, we can earn a small commission. This helps us fund This Is Money and keep it free to use. We do not write articles to promote products. We do not allow any commercial relationship to affect our editorial independence.